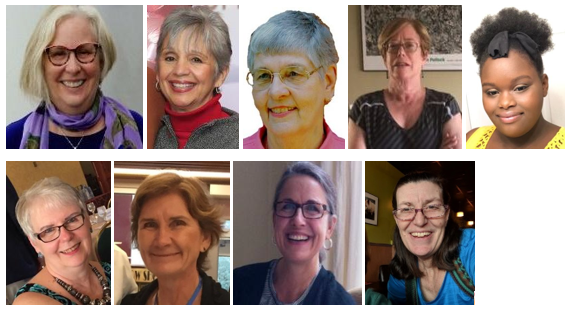 ** Plus Kay Palmer and Richard Johnson, appointed to the nominating committee from the Board of Directors.

The Advocacy Corps is a state-wide committee comprised of volunteer lobbyists and League members from all three counties. The Corps researches pending legislation, decides which bills to support or oppose, and testifies in committee or otherwise advocates for important changes to Delaware law. The Delaware Advocacy Corps also hosts "League Day in Dover" once a year in the spring. League Day is an educational event and luncheon followed by visits to our senators and representatives in Legislative Hall.

Some of the most important work of the League is done in the state Advocacy Corps. League members are encouraged to visit a meeting to observe and consider joining in their efforts. The Corps meets in Dover monthly during legislative sessions and most months in between. For more information contact Linda Barnett, Advocacy Chair.

LWVNCC's Linda Barnett has recently assumed chairship of the LWVDE Advocacy Corps, freeing previous chair Sandy Spence to work on the People Powered Fair Maps Campaign, a coordinated LWV effort across all 50 states and the District of Columbia to create fair and transparent district maps nationwide.

Volunteers are needed to attend and observe meetings of government bodies at the county and city levels... County Council, County Planning Board, Wilmington City Council, Newark City Council, area school boards, etc. When League members attend, often they are the only members of the general public present. Meeting observers help keep our elected officials accountable to their constituents. Please contact us if you are interested in joining the LWVNCC Observer Corps.

The LWVNCC Environmental Committee (EC) has members from throughout the state and works on problems that are statewide as well as those that are particular to specific areas. We also collaborate with other state and local Leagues on problems of regional and national interest. Chad Tolman, chair of the subcommittee on Climate Change, played a vital role in developing a national position on this issue. We have also worked with our neighbor Leagues in the Delaware River Basin to prevent contamination of the river with toxic chemicals from fracking. Within the state, we continue to be involved with renewable energy and slowing climate change, toxic air pollutants, and water pollution from agriculture and poultry processing (particularly in Sussex County).

Coralie Pryde and John Sykes are co-chairs of the EC.

Land Use and Transportation

The LWVNCC Land Use/Transportation committee is co-chaired by Jane Dilley and Peggy Schultz.

This committee keeps a watchful eye on development issues in our county, and transportation policy and open space preservation across the state. Based on a statewide study conducted by the committee, it has an ongoing commitment to advocate for improved public transit and neighborhoods characterized by walkability and bike-ability, a strong sense of place, mixed use with a broad range of housing choices, connectivity, compactness, and environmental integrity. The committee also has a particular interest in transportation and land use solutions which reduce the carbon footprint.

Check VOTE411 for Delaware candidate info... presidential primary on July 7 and school board elections on July 21, 2020.

Also, follow the links from VOTE411.org to request your Delaware absentee ballots for 2020 now!