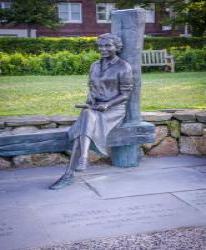 Promote an environment beneficial to life through the protection and wise management of natural  resources in the public interest by recognizing the interrelationship of air quality, energy, land use, waste management and water resources

The Committee has adopted a Sustainability Policy for the League's functions.

In 2018 the Natural Resources Committee focused on Solar Energy. A local business had recently erected solar parking canopies in their front yard setback and the Planning Board was proposing a change in the Zoning Code to bring such developments under their review, or a Moratorium on Solar Projects if they couldn’t get review authority . At the same time, they pushed to expand the Zoning Code provision for large ground mounted solar arrays, which were currently limited to only the existing array parcel at the capped landfill and a few much smaller Light Industrial C parcels. The committee prepared a public program on these issues, held November 1, 2018 at the Hermann Room of the Public Library. This was attended by about 40 people and was recorded and broadcast by FCTV. A You Tube video of the presentation was also posted on line. At the Fall Town Meeting, the town passed a Ground Mounted Solar Array Overlay District, greatly increasing the land area where such arrays were permissible and rejected the Planning Board ‘s proposed revisions to control the design and placement of solar parking canopies as well as the Moratorium. Several other solar Warrant items failed, but it was a positive outcome for the Committee and sustainability overall.

Solar Power  A discussion of Solar Power and Zoning issues in Falmouth created by the LWVF Natural Resources Committee, 11/2018.  A 20 minute slide show is also available.

Issues:
Natural Resources
League to which this content belongs:
Falmouth

All Posts Related to this Committee

Submitted by Falmouth in October 2019.

The Natural Resources Committee of the League of Women Voters of Falmouth will host a public presentation on Coastal Resilience.

Submitted by Falmouth in August 2019.

Join the global Movement to end the Climate Crisis

League of Women Voters ® of Falmouth