History of the LWV Leelanau County

History of the LWV Leelanau County

Following the defeat of the county-wide millage and the County Commission's vote not to renew its support for this program, membership dwindled. In 2008 CIDG members voted to become the Leelanau County Unit of the League of Women Voters Grand Traverse Area. Fifteen women joined, with Kathy Turner as President. 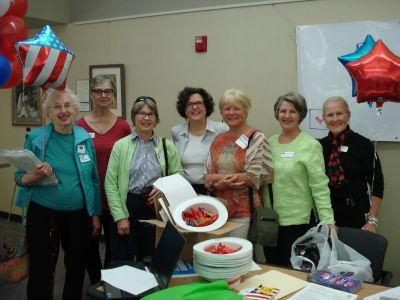 By 2010, thirty-five people had joined the group. Vina Mikesell became President. Energized by the increase in attendance at its monthly meetings and growing membership, the unit undertook two studies: Energy, chaired by Ann McInnis, and Agricultural Migrant Worker Visas, chaired by Suzanne Hoff. The Agricultural Committee "studied past, current and proposed employment methods and work visa programs used by agricultural employers in our area." The group reported its findings in February 2012 to a standing room only crowd at the Government Center and went onto present its study at the 2012 LWVMI State Convention. The committee, reorganized as the Farm Labor Task Force, has continued to study the difficulty of finding enough skilled workers to harvest and process local crops. The group has become experts on this subject, contributing to many local publications and presenting numerous programs throughout the area.

The Energy and Natural Resources Committee continues to study the many forms of renewable and alternative energies that could be adopted in Leelanau County. The group hosted an Energy Fair in 2014.

In April 2012, after membership had grown to 45, President Mikesell opened the discussion of whether it was time to consider becoming an independent League. Members agreed. After a year of preparation, the unit applied to the LWVMI and LWVUS for independent status. It was granted on June 14, 2013. The League of Women Voters Leelanau County became the 391st League in America. The first Board of ten was President Mikesell; Vice-President Suzanne Hoff; Secretary Sharon Golm; Treasurer and Webmaster Jo Ellen Walker; Board Members: BJ Christensen, Marian Kromkowski, Ann McInnis, Barbara Reinert, Martha Shaver and Mary Tonneberger.

The League of Women Voters Leelanau County (LWVLC) now numbers more than 100 men and women from all parts of the county. In addition to studying agricultural and energy issues, committees have been looking at Early Childhood Needs and Services and the Changes in Leelanau County. The LWVLC hosts monthly meetings, sponsors numerous candidate forums and cooperates with the County Clerk to register new voters. In the fall of 2013, the group received a grant from LWVUS Ed Fund to register high school students for the 2014 election. In the 2014 election year the LWVLC helped register 122 new voters.