DEADLINE TO CHANGE YOUR
PARTY ENROLLMENT

Change or select your party by February 14th

or miss your opportunity to vote in

Application to change one's party enrollment for any primary election in 2020 must be received by the board of elections no later than February 14, 2020.

The voter registration form should be used to change your party enrollment from one party to another or to enroll for the first time in a party. A change of enrollment received up until February 14th each year will be effective immediately. Changes received on or after February 15th until seven days after the June Primary will be set aside and opened the seventh day following the June Primary and entered in the voter's registration record.
elections.ny.gov/VotingRegister.html

Apply now for the 2020 Students Inside Albany Conference

To apply for the May 2020 program, please write an essay giving your qualifications for Students Inside Albany and why you would like to participate. Also include a reference letter from an adult (not a relative). You must be 16 or older and a resident of the Town of Smithtown to apply. Email applications before January 31, 2020 to lisawscott@gmail.com. 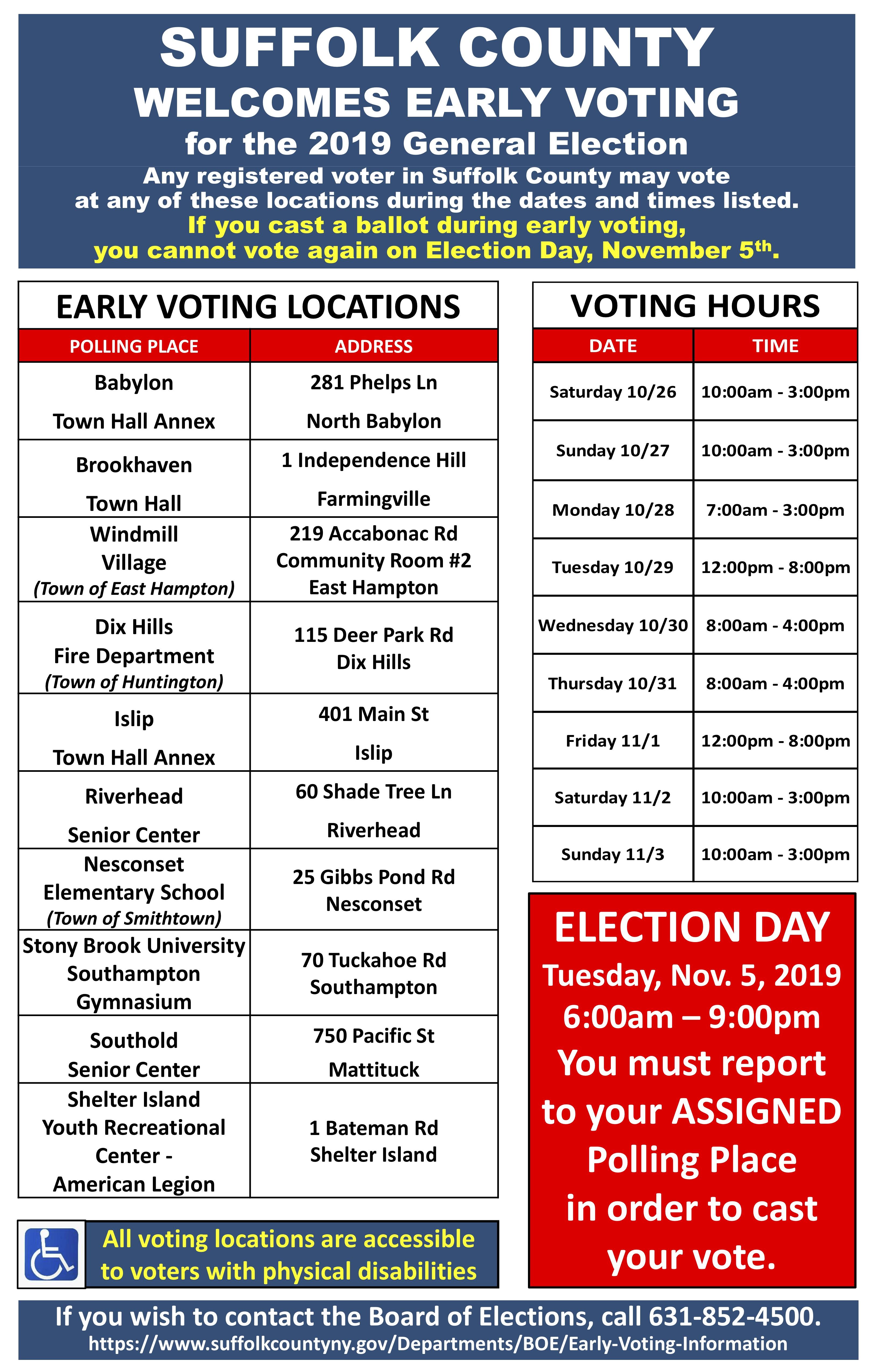 Please note, these location are subject to change, so it is advisable to check back here in the coming weeks and months. If you have any questions, please contact the Suffolk Board of Elections at 631-852-4500.

Suffolk County Board of Elections

New York State Board of Elections Voter Look Up (to see if you are registered and to see your assigned Election Day poll site.)

For any questions regarding your ballot, please call Suffolk County Board of Elections at 631 852-4500.

REMEMBER: You must be registered in order to vote. You may register if you are 18 years of age by Election Day; a resident of the county for at least 30 days prior to the election, and a citizen of the United States. If you have moved since the last time you voted, you must re-register.

Suffolk County Board of Elections 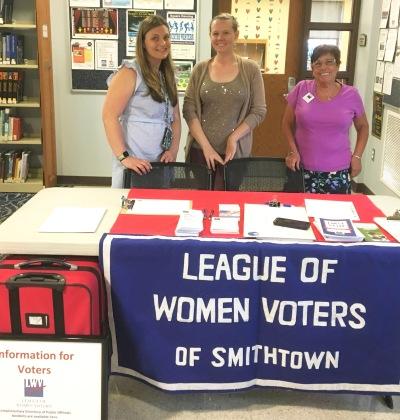 For college students wishing to vote in the November midterm elections, guidelines both for voter registration and absentee voting continue to be available from the Smithtown League of Women Voters.

The League and the Smithtown Library recently collaborated on a Young Adult Voter Registration Drive, offering registration forms and counseling from League members at each of the Library's four locations. However, a genuine urgency remains for students attending a college away from home.

Students attending schools away from their home-residential communities who wish to cast ballots must plan ahead both to register to vote, and once registered, decide whether to apply for an absentee ballot. On some campuses, it is possible for a student to register and cast a ballot somewhere in the college community, but this possibility must be determined in advance from the college registrar or campus student affairs office, particularly in out-of-state colleges.

As noted by the New York State League of Women Voters, "the right to vote is fundamental in a democratic society." To assist young people, local leagues stand ready to answer questions about eligibility to vote, the registration process, voting venues, and voting procedures.

Smithtown Township youth, and their parents, are urged to call the Smithtown League of Women Voters at (631) 523-1653 or email lisawscott@gmail.com to obtain this necessary information. 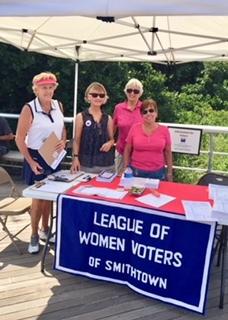 The League of Women Voters of Smithtown

The League has been in existence since February 14, 1920. The League is an outgrowth of the suffrage movement. The American Women's Suffrage Association had a victory convention in Chicago in 1920. It was there that a strong-minded woman, Carrie Chapman Catt, proposed a League of Women Voters. The League's purpose would be to "finish the fight," by educating women for the vote they had struggled so hard to achieve. Its founders quickly discovered that it wasn't only women who needed assistance as voters, and that the need for the League would not vanish after five years as originally thought.

It was the zeal of Carrie Chapman Catt that established the League, which is now in all 50 states, Puerto Rico and the Virgin Islands. It was her organizing genius and leadership that brought the adoption of the 19th Amendment to the Constitution in 1920, making the United States the 27th country to grant women the right to vote. The League has been a force in public policy since its founding because of sound, informed work at the grassroots level, and Carrie Chapman Catt set its standard.

In 1885, after she married Leo Chapman, the editor of the Mason City Iowa newspaper and worked as an assistant editor, she organized a group of women to canvas the town for signatures to support a bill granting suffrage to women, all but 15 women signed. This caught the attention of the national suffrage movement. After her husband died, Catt became state organizer for the suffrage movement in Iowa. In 1890 she married George Catt, but only after he had signed a contract agreeing that each year she could devote two months in the spring and two months in the fall to speaking and organizing women's suffrage. In 1900 she was elected president of the National American Women's Suffrage Association and continued working for women's suffrage until it was passed in 1920.

Mrs. Ethel Dreier and Mrs. Molly Hoyt (of the Hoyt Farm family) founded our Smithtown League in 1920. They had marched in the Women's Suffrage Parade in New York City and were inspired to start a League in Smithtown.

In the 1920's and 1930's Smithtown was a rural community so the League concerned itself with National and State affairs. However, after the land boom in the late 1940's, the League studied town planning. The report won a prize for excellence at the New York State Fair. The Smithtown Town Board used the League study for many years in its planning.

During World War II, The Smithtown League did a study on rationing. Years later, during the formation of the United Nations in San Francisco, the League sent a telegram commending the founders for work done for world peace.

The years have wrought many changes. Most of the members are in the workforce outside the home. Membership is now open to men as well as women. The fundamental aims of the League of Women Voters, however, are still appropriately expressed in a quotation from a 1919 League pamphlet described as follows: "The organization has three purposes + to foster education in citizenship, to promote forums and public discussions and support needed legislation." Remember, the League is non-partisan, but political. This means "we don't endorse candidates" but we do "lobby legislators." A past Smithtown President, Ida Kimbrig, best expressed another of our fundamental aims with the words, "let the people know + make the people care + help the people act."

The Smithtown League of Women Voters is always ready to welcome new members. Accordingly, anyone wishing to learn more about the League and its activities, with the potential for membership, is invited to call 499-0107.

The Smithtown League meets socially every last Friday of the month at Bagel Express - 264 W. Main St. in the Hilltop Shopping Center (Smithtown). We get together for breakfast and discussion at 9:00 AM and would welcome anyone who is interested in civic affairs, wants to improve local, state and national government and is willing to work in a nonpartisan way to accomplish this.

Impact on Issues 2012-2014: A Guide to Public Policy Positions of The League of Women Voters of The United States

In the 111th Congress, the League lobbied in support of the DREAM (Development, Relief and Education for Alien Minors) Act that would provide a path to citizenship for young immigrants who complete a college degree or serve in the military, thereby enabling them to be a fully productive part of American society. The legislation passed the House, but lacked enough votes to overcome a filibuster in the Senate.

Statement of Position on Immigration, as Announced by National Board, April 2008:

The League of Women Voters believes that immigration policies should promote reunification of immediate families; meet the economic, business and employment needs of the United States; and be responsive to those facing political persecution or humanitarian crises.

Provision should also be made for qualified persons to enter the United States on student visas. All persons should receive fair treatment under the law.

In transition to a reformed system, the League supports provisions for unauthorized immigrants already in the country to earn legal status.

The League supports federal payments to impacted communities to address the financial costs borne by states and local governments with large immigrant populations.

Criteria for Legal Admission to the United States

The League supports the following criteria for legal admission of persons into the United States:

In achieving overall policy goals, the League supports a system for unauthorized immigrants already in the country to earn legal status, including citizenship, by paying taxes, learning English, studying civics and meeting other relevant criteria. While policy reforms, including a path to legal status, remain unachieved, the League does not support deporting unauthorized immigrants who have no history of criminal activity.

Our work consists of voter service activities, education and advocacy.

Study,
Keep informed,
Educate the public,
Lobby our Legislators,
Encourage all those eligible to vote
Help us succeed in our mission to:
Let the people know
Make the people care
Help the people act

History of the League of Women Voters

The League of Women Voters was founded by Carrie Chapman Catt in 1920 during the convention of the National American Woman Suffrage Association. The convention was held just six months before the 19th amendment to the U.S. Constitution was ratified, giving women the right to vote after a 72-year struggle.

The League began as a "mighty political experiment" designed to help 20 million women carry out their new responsibilities as voters. It encouraged them to use their new power to participate in shaping public policy. From the beginning, the League has been an activist, grassroots organization whose leaders believed that citizens should play a critical role in advocacy. It was then, and is now, a nonpartisan organization. League founders believed that maintaining a nonpartisan stance would protect the fledgling organization from becoming mired in the party politics of the day. However, League members were encouraged to be political themselves, by educating citizens about, and lobbying for, government and social reform legislation.

This holds true today. The League is proud to be nonpartisan, neither supporting nor opposing candidates or political parties at any level of government, but always working on vital issues of concern to members and the public. The League has a long, rich history,that continues with each passing year.