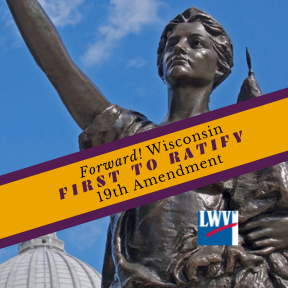 Welcome to the League of Women Voters of Wisconsin’s central portal for information on 2019-2020 League-related Centennial events, activities and resources. In 2019 and 2020, the League will observe the 100th anniversary of three seminal moments in the history of our organization and our democracy:

From Wisconsin’s first-to-ratify action in support of women’s suffrage, to the call for the formation of a unified League of Women Voters by Ripon-born Carrie Chapman Catt to “finish the fight,” and on to final victory in the passage of the 19th Amendment, Wisconsin has much to be proud of in the roles played by citizen suffragists during their decades-long struggle for women’s enfranchisement.

Local Wisconsin Leagues are busy planning educational and celebratory Centennial events and activities in their hometowns and regional communities. LWVWI is engaged in similar commemorative Centennial event planning at the state level. To keep everyone informed and aware of what is happening at both the local and state level, this website page was created to provide shared access to Centennial information.

Toolkits for local Leagues have been developed by LWVWI and LWVUS to help local Leagues plan for and message Centennial events with consistency through shared content.

NOTE TO LOCAL LEAGUES:  If you are thinking about developing promotional and/or commemorate items for your League and want to learn if other local Leagues are in the process of doing the same, please reach out in real-time discussion with other League members through the Centennial Google Group.

Join the conversation: Any League member is welcome to join the Centennial Google Group, simply email your request to lwvwisconsin [at] lwvwi.org.

Together, let’s celebrate and commemorate the 39 words that took over seven decades to manifest as truth and changed the face of the American electorate forever!

“The right of citizens of the United States to vote shall not be denied or abridged by the United States or by any State on account of sex. Congress shall have power to enforce this article by appropriate legislation.”

- 19th Amendment to the US Constitution

League of Women Voters ® of Wisconsin